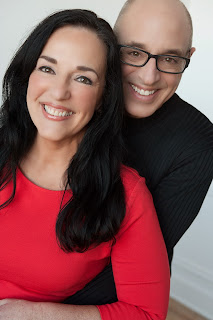 Meet Steve and Rosie Koebele — a couple of beautiful “characters” who humbly and enthusiastically shared this Glory Story with us.  I say “characters” because these friends are established in the TV, film and acting communities with a great mix of talent from serious to silly. Their story is a beautiful example of how God reveals Himself when we are obedient in responding to His prompting.

“GOD USES ANYTHING — EVEN A RANDOM SAFETY FLAG IN YOUR GARAGE!!!!

We were driving out of a superstore parking lot earlier this week. There were two men sitting in their motorized wheelchairs waiting for a bus. As we drove past, I noticed one had a safety flag and the other didn’t.

I told Steve, “I think we’re supposed to go back and tell that guy we have a safety flag for him.”

So we turned around and I jumped out of the car saying, “This might sound a little weird but…”

The gentleman with the flag laughed and said, “You’re lost!”

“No,” I said, “but we drove past a minute ago and noticed you had a safety flag on your wheelchair but your friend didn’t. I have one at home!”

He responded, “I almost got hit three times without this flag!”

His friend agreed, “I need one!”

Steve said, “If God wants us to deliver it, he’ll keep them there.”

We sped home, grabbed the flag and some mounting tools, and off we went with the flag flapping in the wind out the window. What fun!

We got back to the spot but they were gone. We couldn’t believe it! Then from across the parking lot, we saw our flagless friend speeding our way in his motorized wheelchair! It was Eddie!

He explained that they had passed up the first bus because they didn’t want to miss us. They hoped we’d come back, but waited at the other stop so they didn’t miss the next bus.

We hopped out and Steve quickly sawed off the rod to the appropriate height for the flag and attached it with zip ties just as his friend came zipping back.

“Why did you have a flag?” Eddie asked. “I wondered how I would get a flag because I’m on a fixed income and can’t afford it.”

“Jesus gives you one, that’s how!” I explained. “We sold our 4-wheeler a month ago and forgot to include the flag!”

Eddie’s friend said, “Yes! I know Jesus, He’s a good friend of mine! “ Then he turned around and went speeding towards the bus stop to hold the bus for Eddie.

We finished up with Eddie and prayed for him and he sped toward the bus stop to catch the next bus.

Just about an hour before this God-appointed connection, Steve and I were nearly hit by a car. Had we been hit, this meeting would not have happened.

What a very sweet moment in time!”

If you have a story that shows how you’ve seen God’s presence and power, please tell it!  We honor God and encourage others when we talk about how we are experiencing our relationship with Him, especially when life is challenging.